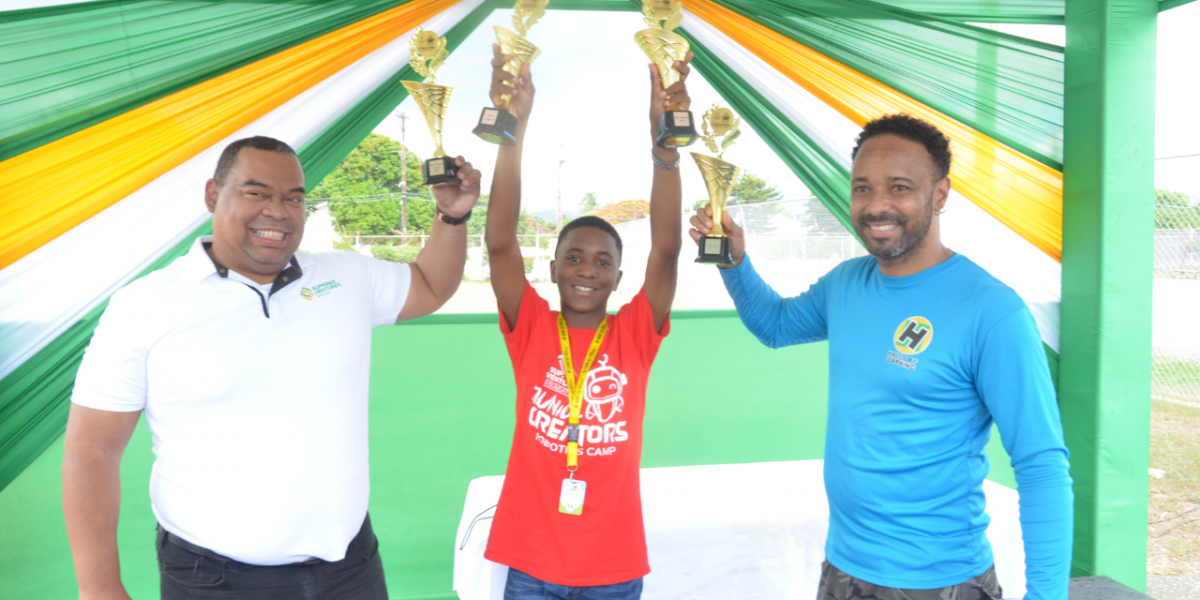 It was not surprising that of the 80 students who participated in a weeklong robotics camp organised by the Supreme Ventures Limited (SVL) Foundation and Halls of Learning, Robeano Davis came out on top with a quadruple victory.

Given his leadership qualities, Robeano’s class teacher, Nadine Walker, was confident that he would tackle any task with dedication and passion.

“He is disciplined, assertive, highly respective, self-driven and self-motivated,” a proud Walker said of her young charge.

“He was shy, but let I tell you, he has really come out of his shell a lot and is one who is always striving for excellence,” she added.

An overwhelmed Robeano told The Gleaner that although he had taken the training camp very seriously and had put in the effort to learn as much as he could, he did not expect to walk away with four trophies.

He was awarded Best Attitude; Best Boy Camper; Best Pair, a joint award with his partner, Chaequan Stewart; and named one of four superachievers, which allowed him to join other recipients in cashing in on part of the $200,000 worth of scholarships to cover two years of their academic studies.

“I have always had an interest in robotics,” Robeano said, noting that his involvement stemmed from the influence of his parents, who both work in the tech field.

“To get so many trophies, I know that they will be very proud,” he said.

With eyes set on joining the military and serving his country in the future, his is planning to continue studying robotics when he transitions to Kingston College in September.

“I hope to excel more in Kingston College because I know that there are many opportunities over there,” Robeano said, describing robotics as fun.

Malia Simpson, who was recognised as the Best Girl Camper, told The Gleaner that she had fun creating race cars, lighthouses, and flashlights.

She stated that the spike prime, which gave her the ability to use codes and sensors to manipulate her robots’ movements, was the best part of the camp.

She hopes to continue her journey in enhancing her technical abilities through studies in computer science.

SVL Executive Chairman Gary Peart said that when the camp was first conceptualised in 2016, it was the team’s vision to introduce Jamaican children to science, technology, engineering and mathematics (STEAM) in a creative environment to foster their ideas and broaden their imagination.

She said that Supreme Ventures sought to teach the youngsters that they did not have to live as consumers their entire lives, but rather that they should consider becoming creators of technology that other people might also enjoy.

Education Minister Fayval Williams acknowledged that many of the children coming out of nearly two years of online classes were more computer literate. She also commended SVL and Halls of Learning for their continued work.

Halls of Learning was founded in 2003 and is a Jamaican educational services provider dedicated to empowering the lives of people through education through robotics and coding.

“I am particularly pleased that so many of you had the opportunity to participate in this camp,” Williams said, noting that the activities complemented Jamaica’s national development plan, Vision 2030.