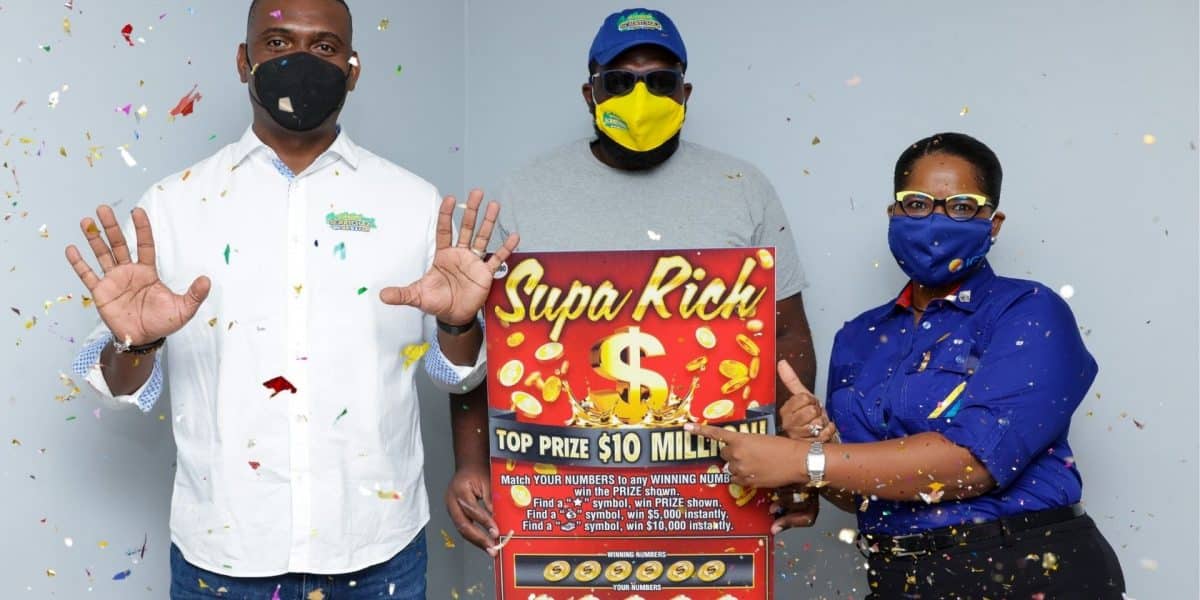 P. Williams is basking in his winnings after becoming the latest Supreme Scratchaz millionaire! He won the $10 Million jackpot after purchasing the lucky $1000 Supa Rich ticket at the Acropolis Gaming Lounge in Barbican, St. Andrew.

Williams, who has been consistently purchasing Supreme Scratchaz tickets since its launch earlier this year, says he was in shock when his ticket turned out to have the grand prize. “I’m always buying Scratchaz tickets and have won up to ten thousand dollars on one ticket before. I bought the Supa Rich for the first time to try my luck as it’s a new game. When I scratched this ticket and saw the amount that I won, I was trembling! I didn’t know how to react.” he shared.

“I haven’t really made any plans as yet for the money as I’m still in disbelief. The only thing I’m sure of is that I’ll be treating my mom and getting her something extra special for her birthday and I’ll definitely be investing some of it”, said an overjoyed Williams.

Xesus Johnston, CEO of Prime Sports, a subsidiary of Supreme Ventures was thrilled at the news of yet another Supreme Scratchaz millionaire.

“Since we launched Supreme Scratchaz in March, our players have won over Two Billion Dollars in prizes. We continue to innovate and introduce more new and exciting games to allow them even more options to change their lives in an instant. Supa Rich is our newest game with the biggest top prize of $10 Million and we’re especially thrilled to have our first jackpot winner. It highlights that with Supreme Scratchaz players do win nuff, win often and win right away. They can look forward to even more winnings with Supa Rich as there are even more ten million dollar tickets to be won.”

Customers currently have a selection of eleven different instant win scratch games ranging from J$100 – J$1000 per card and have the chance to win up to J$10 million dollars instantly. Supreme Scratchaz is available at all Supreme Ventures retailers islandwide.