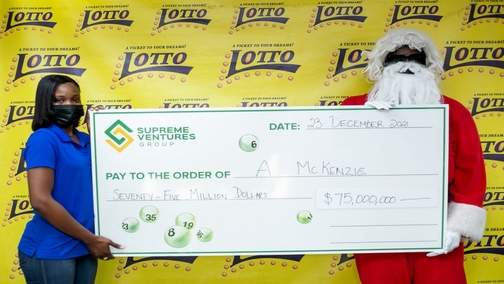 ST CATHERINE, Jamaica — The newest Lotto millionaire is counting his win as a blessing as he says he plans to use his money to transform the lives of his immediate family members.

Mr Mckenzie bought the winning ticket at Liz’s Lotto in Portmore, St Catherine on December 8 to secure a $75 million payout.

McKenzie said he wants to use his winnings to transform the lives of his loved ones and revealed that paying off his mother’s mortgage will be among the number of personal issues he plans to address.

“Most of the numbers, well some of them, are a combination of numbers having to do with people that are important in my life like their date of birth etc. They mean something to me.”

In a release from Supreme Ventures, McKenzie encouraged his fellow gamers to remain optimistic about their chances of winning.

“Based on my attitude and drive, I have always felt like I would get somewhere based on my ambition. But never in my wildest dreams would I think that I would win. I just knew it was possible. So the only thing I can really say is to maintain a positive attitude and mind and see where it goes. You can never tell but dreams do come true,” he said.

In the meantime, Supreme Ventures says it is proud to continue transforming the lives of regular Jamaican citizens and making winners every day through all its games.