20 wards of the state get SVL scholarships 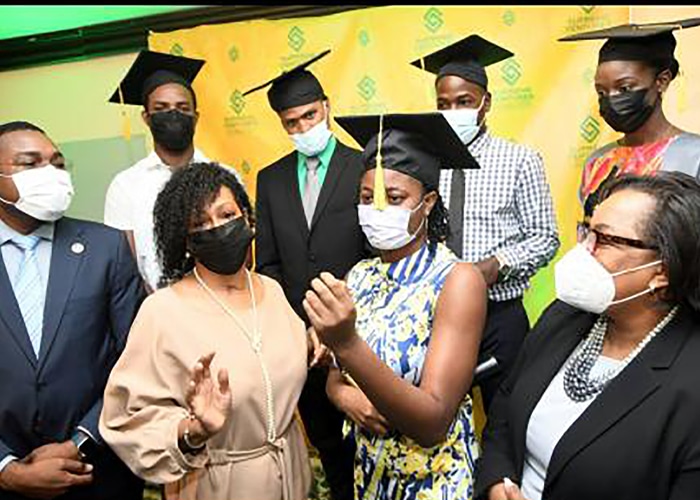 Supreme Ventures Limited (SVL) has donated a total of $100 million to 20 outstanding achievers in state care, as part of its 20th anniversary celebrations. Awardees will be able to pursue tertiary education for four years through the Supreme Ventures Foundation (SVF), with the foundation financing all expenses inclusive of tuition, boarding, subsistence stipend and miscellaneous expenses.

Awardees are said to be pursuing degree programmes in areas such as actuarial science, architecture, law, economics, civil engineering, dentistry and education, among other disciplines.

Through initiatives such as the one hosted on Tuesday at The Pegasus hotel, Goldson said the SVF will continue to reaffirm one of its main goals, which is the safety and well-being of children in state care.

The foundation also intends to keep giving back to the community by providing “tools of success”. The SVF anticipates that many young people’s dreams will come true as a result of this, as the organisation is dedicated to “recognise that our human capital comes from the length and breadth of our country, and the talent and drive that Jamaica has been overly blessed with should never be taken for granted and always nurtured and encouraged,” Goldson said.

“Upcoming generations must be encouraged, and for those in state care, reminded that they are never forgotten,” she added, noting that their potential to be nation-builders will be recognised.

Robert Morgan, state minister for education, youth, and information, took a trip down memory lane as he reflected on his own experiences as a young person seeking tertiary education.

Morgan asserted that he was not born into an affluent family and used the Students’ Loan Bureau to further his education. “I remember sitting out at (the) Student Loan (Bureau) at 2 a.m., trying to get in to apply,” he said.

This pursuit, he said, is “the most powerful tool in lifting persons out of poverty [and in other challenging situations],” which is not by the fault of the youths but of adults and the society, said Morgan.

He commended the efforts of the SVF that have sought to invest into an area where, he said, many persons are unaware of the existence of the wards of the state.

“So when a corporate company pulls away the veil and decides to invest in our children who most need it, it is something that we all must give a round of applause for,” Morgan added.

Given the numerous challenges that the child care sector continues to confront, Morgan stated that the ministry will continue to work with corporate entities such as Supreme Ventures to collaborate with private homes, the Government, and the Child Protection and Family Services Agency (CPFSA) to improve the lives of children.

According to Rosalee Gage-Grey, CEO of the CPFSA, over 220 youngsters in state care have transitioned to universities and colleges across the island. She also praised the SVF’s efforts as they helped to turn the spotlight on the youths’ journey to infinite achievement.

Gage-Grey advised the awardees that as they embark on this journey, they should make the very best of it as they pave the way for others following behind them.

Nishka Noble, one of the recipients who will be studying communication arts and technology, majoring in public relations at the University of Technology, Jamaica told The Gleaner that by living by her own philosophy of ‘change being constant’, she said she had always faced some difficulties living in state care after she had no family to take care of her.

However, this did not dampen her ability to encourage others as through her experiences she is well aware that the challenges that one might face as they navigate their way through life will not become a persistent life obstacle.

“It’s very hard, not to be a product of your environment, and it’s very hard to get people who are like-minded around you,” Noble added, but through hard work, belief in one’s self and reading as she experienced the world through other people’s eyes, this has helped her to reap success such as the one presented to her recently.

Filled with an overwhelming feeling of being blessed, Elisa Whyte explained that to be a part of the select few out of the thousands of children in her age cohort who could have benefited from the scholarship allows her to be very humbled and grateful.

Transitioning to The University of the West Indies, Whyte told The Gleaner that she was inspired to become a nurse because of her mother who got severely ill and later passed away when she was younger.

“When she got ill, I was the one who was taking care of her, but she died and I really wish that I was in the position to assist,” she said.

Whyte therefore imparts to other youngsters who may feel like they would want to give up on finding a way out of their challenging circumstances to stay strong and “keep pushing”.

“I know that being in state care is hard sometimes, but you have to keep pushing because there are going to be obstacles. You have to just know what you want,” she added.

The SVF has also executed other initiatives for children in state care, such as the multimillion-dollar fire safety programme that has so far upgraded the fire alarm systems in 22 homes islandwide, and has provided ongoing training for staff and wards on how to conduct themselves during a fire emergency. This was in partnership with the Ministry of Education, Youth and Information in 2019 in response to the ongoing issue of fires in children’s homes.