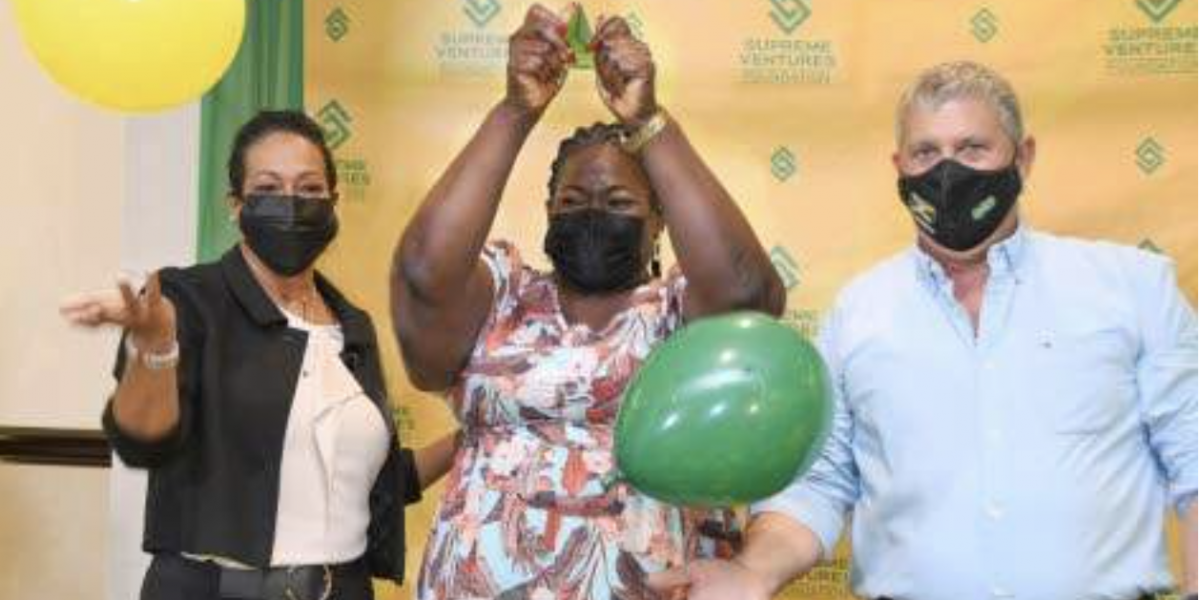 “I am elated,” the 53-year-old told the Jamaica Observer at the closing ceremony held at the Jamaica Pegasus hotel in New Kingston last Friday.

The programme, which was launched by the Supreme Ventures Foundation (SVF) last year, is designed to recognise micro businesses across the island which are integral to the development and well-being of members of their communities. It also seeks to enhance both the business and outreach operations of each beneficiary enterprise.

She explained that although she is a mother of six — one of whom died in 2016 after being diagnosed with schizophrenia — she would always offer help to others in need in the community.

“The method that I used to raise my kids was having the corner shop and just selling affordable things like $10 toothpaste, and I would also cut a tin of corned beef in half. I didn’t think persons should go to bed without a meal because they are poor because I was there too,” said Brown.

“These were things I used to do before Supreme Ventures came on board. I would assist parents with their children especially for back-to-school,” she added.

The other entrepreneurs who made up this year’s nominees were Corey Jackson and Everton Roberts who operate Life Yard Restaurant in Kingston, Sophia and Michael Barnett who operate New Horizons Christian Outreach Ministries in St Catherine, and Elma Thompson, owner of Miss T’s Hardware in St James.

“Our focus is on giving back from a socially sustainable standpoint. We are focused on those companies that are doing that. One of the things that we and the rest of Jamaica have recognised, is that our engine of growth is micro finance.

“So, from a philanthropic standpoint, we wanted to make sure we were a part of that and we were able to push from behind the scenes, the people who are not really at a recognisable level, as the more established organisations,” said Goldson.

In the meantime, SVF Chairman Peter McConnell said he was proud of the entrepreneurs for their work in uplifting their communities.

“Not only have you taken up the mantle of entrepreneurship by starting your own business, but you have remained in your communities, creating jobs, offered services and goods and assistance to those in need. On top of that, you have created outreach programmes, where the most vulnerable in your community can be treated with the human dignity they deserve. For all of this and more, we salute you,” said McConnell.

Each participant should now be registered as both a business and a charitable organisation, and will have a unique five-year business plan inclusive of a comprehensive financial plan which will be a road map to sustainability. Participants will also have a better working knowledge of basic business practices.

Miss Jenny plans to build a community centre for her next project, as a way of giving her winnings back to her community.

“I want to do this, so that another child will not be on the road. They can be in the learning centre, learning a trade. I would encourage others — you don’t have to have much, because I didn’t have much. But give of yourself to make your community a better place. There are people in the violent communities who just need a push,” said Brown.