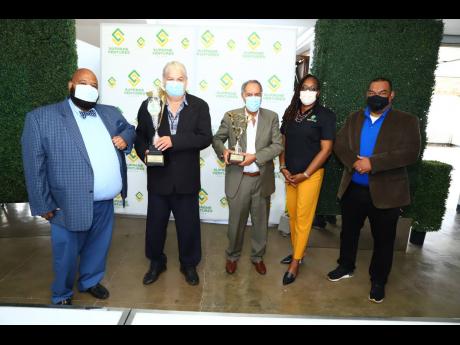 SVL and its subsidiary, Supreme Ventures Racing and Entertainment Limited’s (SVREL), yesterday announced a joint sponsorship package for the December 26 and 27 race meets’ purse in a move that has been welcomed by stakeholders, including champion trainer Anthony ‘Baba’ Nunes.

Peart, who shared the news during a press conference, which was held at Caymanas Park yesterday, underlined that the gaming company was determined to continue to demonstrate its commitment to the local racing product in the years to come.

“This weekend is extra special for us at Supreme Ventures because not only is it a testament to our love for the sport of horse racing, but also a testament to our commitment to the industry, its stakeholders and its future,” said Peart.

Meanwhile, Nunes, who is on course to secure his second straight trainer’s title, was thrilled with the announcement and believes it will energise the industry in light of the challenges presented by the coronavirus pandemic over the past few months.

“It is fantastic for racing because we are very fortunate that in a COVID-19 year we even have racing, and for us to be rewarded at the end of the year with some increased purse, it heartens me and makes me feel good about the industry,” said Nunes.

“I anticipate that everybody will have some nice horses running. I think when you have increased purses, then you automatically have competitive races because everybody wants to be a part of it, and everybody wants to go home earning that little extra,” Nunes added.

General Manager of SVREL Lorna Gooden is also looking forward to an exciting weekend of racing.

“I am very excited, and I am hoping that the horsemen will turn in a great number of horses to participate in the races because we have topped up the undercard by $100,000, in addition to the big purses for the feature races,” Gooden shared.

“We are also very excited that the punters will be happy about the horses that will be participating and come out and place their bets with us,” she said.

The weekend will run off on Boxing Day with the feature Ian Levy Cup, with purse money of $4.5 million, with $100,000 being added for each undercard.

Sunday will feature the SVL Jamaica 2-Year-Old Stakes with a $4 million purse as well as the Chris Armond Sprint, which will be run over five and half furlongs for graded stakes and open allowance horses. This event will carry purse money of $2.5 million, and each undercard will have $100,000 added to its purse.