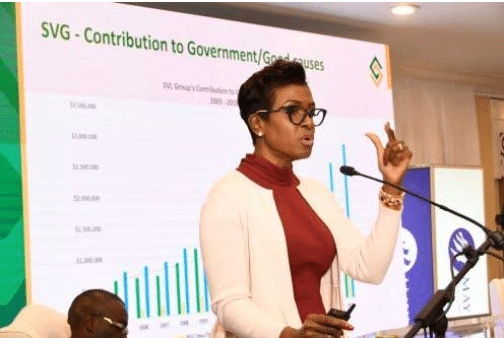 If you have been playing dominoes for fun, relaxation or a chance to join your business house team, it is time you start taking the game much more seriously.

That’s because it is now official that leading gaming company Supreme Ventures Limited (SVL) is planning to pump millions of dollars into an islandwide domino competition, to find the best players as well as offering SVL an opportunity to partner with vulnerable communities that need help to stimulate growth in small and micro business investments.

“Millions of dollars will be won, with bragging rights as to who is Jamaica’s domino champion, ’cause you don’t know where it will go,” SVL’s President and CEO Ann-Dawn Young Sang told last Wednesday’s Mayberry Monthly Forum at Knutsford Court Hotel in New Kingston.

Young Sang explained that the effort is evidence that SVL is determined to stick with its “responsible gaming” pledge, by continuously revamping and reviewing its efforts to ensure awareness that its products are designed for adults, 18 and older, and encouraging customers to game responsibly.

She noted that based on the company’s own research, last year SVL launched a community-driven project called the Supreme Heroes Grants Project, through which it asks residents to nominate persons or organisations among them who are making a positive impact for the grant.

“We go into small communities that oftentimes are forgotten, small business projects that need some assistance sometimes, and we are partnering with them in terms of establishing micro businesses, where the profits go to the less fortunate in the communities, enabling them to operate, by giving them training opportunities and funding to build and sustain their businesses,” she explained.

She said another thing that the research has shown is the popularity of the domino game in many of these communities.

“So we are looking at funding the first annual islandwide [domino] tournament that Jamaicans have ever seen…” she told the audience.

“We are going to be engaging everybody; engage all the communities to have them involved because every domino player in Jamaica believes he is the best player, and we are going to be building on that spirit of community and helping to foster that interest,” she stated.

She explained that SVL believes that this investment will stimulate growth “because wherever you have the domino competition everybody comes out to participate — the pan chicken man, the drinks man, the little snacks person — and it is about sharing and giving persons other things to do and providing opportunities, and that’s what we are going to do”.

As part of its commitment to promoting responsible gaming, SVL says it is a staunch supporter and partner of Rise Life Management, the only organisation of its kind in Jamaica, which deals with counselling and behavioural changes for persons with addictions of any kind.

“We are annual supporters of their campaign against underage gambling, too,” she told the crowd.

In addition, she said that SVL has been honouring persons and organisations making a positive impact on these communities through the Supreme Heroes Grants.