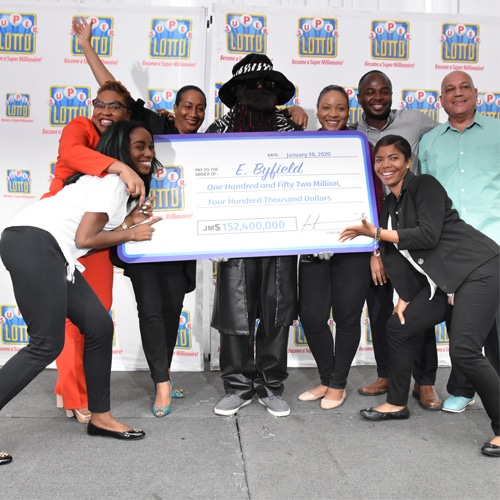 The winner, a Jamaican, was fortunate to hit the mark for the final Super Lotto draw of 2019, totalling $152.4 million.

E Byfield had extra luck on his side after purchasing winning numbers 05, 06, 07, 19, 20 and Super Ball 04 on December 31st at JJ’s Mobile Phone and Company in Spanish Town, St Catherine.

Byfield was obviously still in shock after processing the news of his Super Lotto fortune. the new millionaire, visibly anxious, was a picture of felicity, declaring, however, it has always been a dream of his to one day become a winner.

“I am elated and honestly grateful. I am planning to purchase a house, that is the ultimate goal,” he shared.

According to Heather Goldson, deputy CEO at Supreme Ventures Limited, “Closing out 2019 with a Super Lotto winner was a great end to what we feel is a super exciting year for the Supreme Ventures Group; It was also quite unbelievable that someone had won on the very last day. It was a perfect end for 2019 and start for both us and the winner.”

“[The year] 2019 was a landmark year for us as we celebrated our 18th year of operation, launched our Supreme Games mobile app, debuted a fresh new logo celebrating our growth and the overall evolution as a brand. We acquired Post to Post betting and Champion Gaming, and we further expanded our operations in our first foray out of Jamaica in Guyana. To end such a groundbreaking year with a Super Lotto hit on New Year’s Eve was simply awesome,” continued Goldson.

In addition to the excitement surrounding Byfield’s win, she went further to share some words of financial wisdom and encouraged the winner to make prudent decisions regarding his new-found wealth.