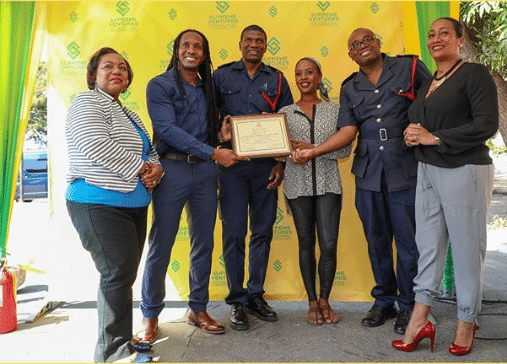 The facility, which has been installed at the institution, is expected to greatly assist in safeguarding the lives of the wards and staff.

The system, its installation, training in its use for personnel at the home, form part of a memorandum of understanding (MOU) between the Ministry of Education, Youth and Information and the Foundation last year, to heighten fire safety in children’s homes.

Minister of State in the Ministry of Education, Youth and Information, Hon. Alando Terrelonge, who spoke during the presentation ceremony at the home, welcomed the provision while emphasising the importance of the Foundation’s overall gesture.

Mr. Terrelonge encouraged more corporate companies to forge partnerships with the Government to assist in heightening the safety of children and the country, in general.

Director of Supreme Ventures Foundation, Heather Goldson, said more than $30 million is being invested in the project, which will see some 30 State homes islandwide receiving fully upgraded fire alarm systems, training from the Jamaica Fire Brigade (JFB) and, in some instances, perimeter fencing by February 2021.

Ms. Goldson noted that, to date, 12 homes have benefited from the investment to the tune of more than $15 million.

She added that over the next two weeks, work is slated to be concluded at four additional homes in rural communities.

“These will quickly be followed by another four that are in the administrative process, and while this is happening, we continue with site visits and assessments,” she said.

Additionally, Ms. Goldson said intense refresher courses in the utilisation of the equipment and safety procedures are also being provided.

“The Fire Brigade, who have been our invaluable partners in the execution of this project, instruct all personnel on the ground on how to use the new fire extinguishers, the proper lifts and carriers for the physically challenged and possibly injured and, most importantly, how to evacuate the buildings with their wards,” she added.

In expressing gratitude, Board Chair for Maxfield Park Children’s Home, Empress Golding, commended Supreme Ventures Foundation for the undertaking, noting that the facility caters to more than 100 children.

During the ceremony, the home was presented with a fire-safety certificate by members of the JFB.

The Maxfield Park Children’s Home was established in September 1918. It is the largest and oldest such facility in Jamaica, and serves as a place of safety for many children who have been abandoned or made homeless.