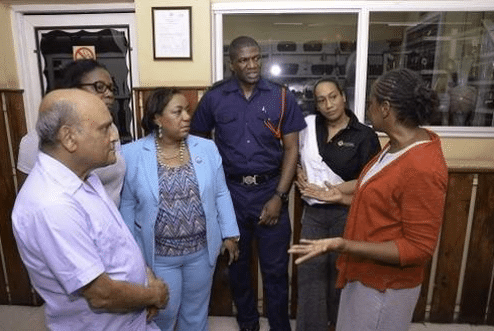 KINGSTON, Jamaica— The Mustard Seed Community home, My Father’s House, received good marks for its response during a recent fire drill conducted by the Jamaica Fire Brigade (JFB) in collaboration with the Supreme Ventures Foundation at the Mahoe Drive facility.

The drill was executed using a newly installed fire alarm system, one of several donated to children’s homes across the island by the Supreme Ventures Foundation under a memorandum of understanding with the Ministry of Education and Youth.

The $40 million programme, signed this year, will see more than 30 children’s homes fitted with an upgraded fire alarm system, fire extinguishers and hose reels coupled with supplementary training carried out by the fire brigade to ensure that the administrators can properly use the new equipment.

The night drill was used to gauge the home’s emergency response and according to Pike while the home passed the test, there is room for improvement.

“The response was surprisingly good.  It was quick and efficient. They got everyone out in about three minutes. However, there is room for improvement and tightening up of the evacuation procedure. I would also add that the assembly point is not lighted,” said Pike.

Administrators at the home, which caters to children who have significant mobility and cognitive challenges, dropped everything once the alarm sounded, rushing their wheelchair-bound charges out the emergency exits along with carts of medication.

Persons from the surrounding community of Seivwright Gardens also rushed in to lend a hand. A quick roll call at the assembly point accounted for all wards and staff members who clapped themselves for an efficient evacuation.

According to Goldson, the drill will allow the fire brigade to identify the weak points in the evacuation process and address the points during the training that accompanies each installation.

“Our programme can’t prevent fires from happening, but it will make sure that the persons who look after Jamaican children in state care know what to do with their charges once a fire does happen,” said the director.

“It was heartening to see the housemothers taking out their charges with such speed and dexterity, and the children being so responsive and understanding of what was happening. In our discussions with the fire brigade we were told that most fires happen at night, so we wanted to test the alarm system and the home’s response in those conditions,” added Goldson.