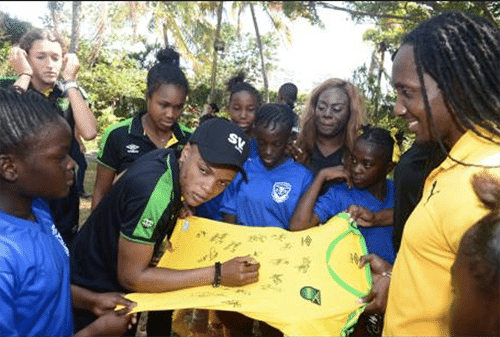 Gold sponsor of the national senior women’s football team, the Reggae Girlz, Supreme Ventures Limited (SVL), invited the team and members of the Greenwich All-Age football team to a last hurrah lunch and dribble social on Child’s Day, Friday, May 17.

In a much needed change of pace, the Reggae Girlz were given an opportunity to relax and rap with the younger footballers. Coach Hue Menzies, who was also invited, encouraged the young ballers to seek the guidance of the Reggae Girlz and ask all the questions they might have about a career in sport.

He commended #TeamSupreme for the activation that allowed the Reggae Girlz to participate in social outreach and connect with the next generation.

Supreme Ventures President and CEO Ann-Dawn Young Sang said that the entire nation is proud of the achievements of the Girlz.

“We are proud of the achievements of our Girlz, and we stand behind them in every way we can. But I see this as more of a partnership than just a sponsorship. We celebrated you earlier this week at the French Embassy, but today, we want you to work with us in this outreach effort,” she said.

Friday’s event was intended to connect and impact the future of Jamaica’s female footballers with the history-making Reggae Girlz. The Greenwich All-Age girls got the opportunity to ask the Reggae Girlz questions about their journey as international footballers and their training habits and life in the spotlight, which the Girlz were quick to answer. The SVL team, which came out in their numbers, were encouraged by the showing of the Reggae Girlz and the Greenwich All-Age footballers as the interaction was very impactful for all.

In addition to the rap session, both teams took to the lawns of The Jamaica Pegasus, where they played a scrimmage game.

State Minister in the Ministry of Education, Youth and Information Alando Terrelonge commended SVL for the initiative and reiterated the Government’s support for the Reggae Girlz on their journey to France while wishing them success at the 2019 FIFA Women’s World Cup.

On May 14, Supreme Ventures hosted the entire squad and technical team along with the top brass of the Jamaica Football Federation at the French Embassy under the patronage of Ambassador Denys Wibeaux.