The Golden Sponsor Comes Forth 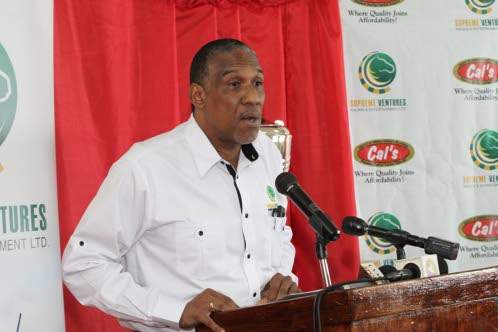 THE purse for the 46th running of the prestigious Grade One Gold Cup received a significant boost of $1 million from new sponsor Cal’s Manufacturing Limited, it was announced at a press conference held at Caymanas Park on Tuesday. The total purse for the Gold Cup now stands at $3 million. Previously the total purse stood at $1.75 million.

The Gold Cup, confined to three-year-olds and upward, is run over seven furlongs (1,400m) and set for Saturday, October 13 at Caymanas Park.

On Gold Cup day special emphasis is going to be placed on the punters as there will be one lucky winner of a 14-karat gold chain.

Cal’s is also hosting a special breakfast (Cal’s Mackerel served with bananas, dumplings and yam) at the track on the day before the actual Gold Cup race.

Speaking at the launch, sales and marketing executive at Cal’s Manufacturing, the vivacious Sabrina Thomas gave details of her company’s sponsorship.

“The Gold Cup over the many years of its existence has produced some truly outstanding performances which is synonymous with Cal’s Manufacturing excellent record of producing quality products,” Thomas said.

“The Gold Cup has all the right ingredients to create probably the most competitive race on our racing calendar…but one thing was missing…a golden sponsor. That is why Cal’s Manufacturing Limited through its flagship product Cal’s Tomato Ketchup – the richer…thicker…more affordable Tomato ketchup is stepping forward to fill that gap,” she pointed out.

Director of Marketing at Supreme Ventures Racing and Entertainment Limited (SVREL) Peter Green, welcomed the sponsorship and acknowledged Thomas and her company for their strong commitment to horse racing in Jamaica.

“For many years, having stood on the outside looking in, there were a few companies that became synonymous with Caymanas Park. One of those said companies is here with us today (Tuesday) and we are happy to announce that Cal’s Manufacturing Limited is back, and ready to get the ball rolling in a big way. They are no strangers to Caymanas Park, this is, however, a new partnership for SVREL and Cal’s but we are so pleased to have them on board for this momentous occasion,” Green said.

Paul Roman, racing manager at SVREL, gave an overview of the event and encouraged racing fans to come out and enjoy the Cal’s Tomato Ketchup Gold Cup.

‘The Gold Cup (GR1) is the most important and prestigious handicap race on the racing calendar as it brings together the best sprinters and the best stayers over seven furlongs (1400m). The distance can be too long for a sprinter and a too short for a horse that prefers more real estate (longer distance), thus, the tactical ability of both the horse and jockey will be crucial if the combination wants to be victorious.

“This race could see the likes of 2017 Horse of the Year She’s A Maneater, sprint champion Chace The Great, Prime Minister’s Stakes winner Will In Charge, The Viceroy Trophy winner Houdini’s Magic, and St Leger winner Marquesas line-up in what should be an extremely competitive race,” Roman said.