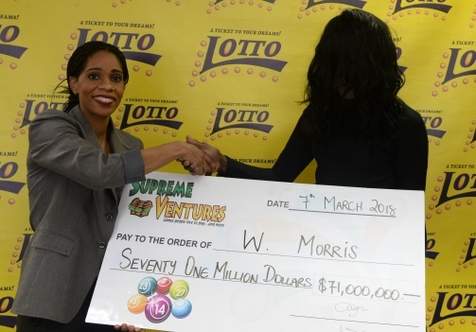 Forty-seven-year-old Morris says he is over the moon with his $71 million win. His significant other, who accompanied him to claim his millions, says it was she who purchased the ticket and discovered that it won the $71 million jackpot.

“Someone told me that a ticket from Barry G’s bar won the Lotto, but he gave me a wrong number and I thought we just caught five. I said I was going to look for myself because people don’t always say the right thing,” she said.

She checked the numbers and realised that they had won, called him at work and gave him the good news.

Morris and his girlfriend described their life before his win as a struggle. Morris, who returned to Jamaica after spending several years overseas, said he had just gone into business for himself a few months ago and has an additional job to make ends meet.

Morris says while he plays all the games offered by Supreme Ventures, he has had too many near misses to count. He says he had “caught” five numbers from a previous Lotto draw and the $7,000 prize went towards his airfare to migrate, many years ago. However, his close encounter with a Super Lotto jackpot of $172 million still stings to this day.

“I’m still cut up over the Super Lotto, I had those numbers for the $172 million but I didn’t buy it that time. When I saw those numbers I was like ‘No, no, no!’” he said.

With a new jackpot of $71 million to consider, Morris says he has big plans for his business and a home for his family.