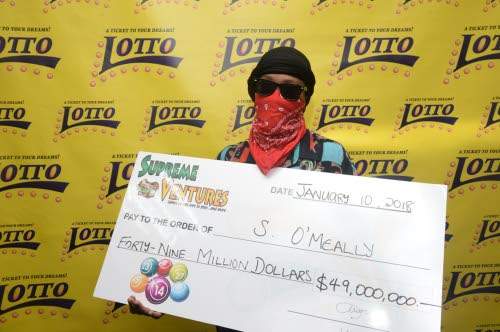 The last Lotto jackpot winner for 2017, S O’Meally, holds a symbolic cheque at the presentation for the $49-million jackpot won on Wednesday, December 6. O’Meally waited four weeks before coming forward with the winning ticket with the numbers 07, 09, 16, 21, 23, 36 and Bonus Ball 05 for draw #1426. The cheque presentation took place Wednesday at the SVL Corporate Office in New Kingston.

O’Meally, the last Lotto winner for the year 2017, left Jamaica guessing for more than four weeks after failing to claim the $49-million jackpot after it was announced that the jackpot had been hit.

O’Meally, who bought the winning ticket in Linstead, St Catherine, said that it was in gearing up to buy tickets for another draw that the realisation came after checking the previously bought numbers — 07, 09, 16, 21, 23, 36 and bonus ball 05.

“I just searched my bag and I found the ticket as my friend was searching online to find out what was the winning number from the draw. I looked at it and I went back into my room and I thought I just had some familiar numbers in that line as usual. Anyway, I went for the ticket and when I looked at the numbers I came out the room and said ‘I won’! It was unbelievable to me that finally, I’m a winner,” O’Meally said.

O’Meally, who has been buying Lotto tickets for 20 years, said numbers bought usually come in dreams and these winning Lotto numbers were no different.

“The numbers that I won with were actually individuals, like seven — Married Woman, nine — Married Man, 16 — The Young Girl and 23 – The Bad Girl. The dream was about a family gathering and those were the persons sitting there, so I just wrote them down,” O’Meally said.

While many people purchase numbers as a source of enjoyment, O’Meally was convinced that one day the dream numbers would hit it big and win.

“I’ve always been close and I always miss, sometimes because of misinterpretation. One time I lost because I played someone as 16 when they were really 21, that was the match 5 and Bonus Ball. I’ve been playing from before there was an SVL terminal in Linstead, I used to go to Spanish Town to buy lottery tickets.”

Now that the dream has been realised, O’Meally said the multimillion-dollar windfall will be a great financial springboard as family life has been a series of monetary ups and downs.

Aside from funding the children’s tertiary education, there are plans to start a business to ensure that the family makes the most of their new-found wealth.

“I’ll start a business and keep working on it and put some in a fixed deposit. This is the capital that I am going to live off of and the fixed capital won’t be needed until much later,” O’Meally said.

Unlike other jackpot dreamers who plan to purchase luxury cars and go on exotic vacations, O’Meally has no affinity for extravagance as a new house is the largest purchase on the cards.